Friday, the 31st of October John and Yoko. One we’ve planned to do for years. It could never be perfect, but it suited us, and the costumes kept us cozy warm.

For a glimpse into our Halloweens gone by, check out the link below. Follow the links in there to see many others, if you’re so inclined. Gnomes, Psy, a daisy woman and Link & Zelda await you.

And bear in mind that a long, varied history bubbles behind this holiday/celebration. No one owns it, and so we all do, in a way. I like to think of it as a time to work toward embracing our fears, because they are always with us, even if the veil only parts occasionally. Boogedy boogedy.

This time of year is about celebrating the spooky, the scary and embracing the fears that make us all human.

Of course, I might be a touch excited, because I’m about to go to New Orleans, and everyone knows that city is awash with vampires – revenants, Nosferatu, the undead. Never sparkly; never vegetarian. These Ricean beasts characterize NOLA, and I can’t wait to reconnect with them in my 16 year old imagination, and mentally run a little wild in the heat of the swampy south.

But, of course, I’ve also learned a few things about where these creatures came from, and why they so haunt us, even after their reworkings and mainstreaming at the hands of certain authors. Also, it’s Wednesday. So, science!

Following are links describing various musings on why vampires are with us. Some suggest they only exist in the mind, while others proclaim they walk among us for real. All are entertaining:

The Science of Vampirism

The Science Behind the Myths: Are There Clinical Explanations for Vampires, Zombies or Werewolves?

Rabies: A Possible Explanation for the Vampire Legend

So much more is out there on this stuff. You will quickly see that vampires are a lot more than monsters born of superstitious mentality.

Now, for something a little more romantic, or at least completely scientifically unhinged, check out my own attempt at vampire fiction. The fairies are ready for Halloween!

Title because I like the way it sounds. Also, because Fall and potential fanciness.

It’s been quite the week, friends. But things ended on higher notes, and now I’m preparing to head to New Orleans on Thursday. My three dearest middle/high school ladies are I are celebrating 20 years of friendship by going to the city that gave us Anne Rice, Creole awareness and something to dream about during those long Michigan winters of our youth.

Of course, it’s also now Halloween season. My new favorite thing is Iris exclaiming “It’s so exciting!” (complete with dramatic tremble) every time I mention seasonal decorations. Over the weekend we took out the black lace table cloth, stuck bats to our walls and checked out the festive taste of our resident fairies, who apparently create wonderful jack-o-lanterns (garden pictured above).

We also hit up the Enchanted Trail at Fat Blossom Farm (with which I am in love). Other points of interest – Michigan Radio member mixer, ArtPrize, Sushi Maki and brownies. A good weekend.

A big part of me loves October, despite its foreboding of The Great White Dark. Every year, I come a little closer to re-embracing the spooky kid sentiment of the aforementioned youth. I have a feeling this year will be helped along by a fancy frock dinner or two in The Big Easy.

Put on something fabulous and enhance your home with some festive black. When else are we allowed to so celebrate the beauty of a little fear? We are fortunate enough to have friends who own some beautiful farm land in Hamilton, MI, and they generously host two very large annual parties. Every June we open the summer season with a Solstice Party, and every October we dress up for the Halloween Party. There’s always live Irish music. There’s always a bonfire and fireworks. And there’s always plenty of festivity.

Just imagine pulling up to an old farmhouse and barn, both lit with the glow of jack-o-lanterns and strings of lights. Everywhere you look there are people dancing, talking and drinking, and there’s a smell of vegetation and fire in the air. You’re welcomed by those you know, and often those you don’t. There are seasonal gardens, horses, gnarly trees and countless lovely costumes. Every time we go to this party, I swear that we’ve entered some sort of “other world,” and it’s always over too soon.

This year, we were Alice and the Caterpillar. In 2012, Psy and Hyuna. In 2011, gnomes. In 2010, Link and Zelda. The links below can take you on a little tour of these costumes and more, including a Banshee and Banhee, Gomez Adams and his sister-in-law Ophelia and Wesley and Buttercup. I’m considering making a book of these…

And more past costumes… Every year, I kind of have to resign myself to Autumn. Don’t get me wrong – I like the colors and the cozy and the flavors. I also love LOVE Halloween. I just don’t like how the warmth continues to wane and the gray of winter draws nearer, both events accompanied by drier skin and higher bills.

Usually, though, by October, I’ve accepted it. This Sunday was a gloomy one, and we spent the afternoon with seasonal wines and peanut soup. I got some work done in our upper level, which escaped the deep clean and decrapify we did in the Spring. I even found an unopened package of cushiony socks. It’s the little things.

Hope you’ve started stocking for mulled wine and planning those excellent costumes. Food and festivity are essential for making it through the cold, as are good times with old friends. Get as much as you can – of all of it. A little departure from the norm today to give the animals center stage.

This is all a part of preparing myself for the cooler weather. As usual, the ritual involves me considering things I actually like about the colder months. One of the big ones is Halloween, and general spookiness. Howling wolves fit in perfectly – full moons, dark woods, ominous music and all that. Love it.

But wolves are really just big old softies, it turns out. A study published in Current Biology found that wolves appear to howl more when a beloved member of their pack goes away for some reason. The wolves are also brown nosers, as the howls did increase when the absent member was high ranking. Howling in this manner did not seem to require a spike in stress hormones.

On a personal note… While I am traditionally a “cat person,” I do appreciate a fine dog. My sister has a wonderful basset named Frank, and he is an excellent character. Still, were I to ever get a dog, it would have to be a serious canine. Something that nearly matched me in weight, and retained the look of a true wolf.

This concludes your animal lesson for the day.

Bones, Explosions and a Happy Halloween!

Hello! And a Happy Halloween and Samhain to you!

Those are our jack-o-lanterns up there… I always seem to make mine with very vacant eyes. Going to try something a bit less, um, dull next year. The hubs wanted to carve a pacifier into Iris’ wee pumpkin, but that’s a lot to tackle at 2am. His, on the other hand, are always adorable.

As it is sciencey/practical Wednesday, I peeked at Reddit’s headlines to bring you the following links:

Vertebrates and the Evolution of Air Breathing

An Explosion of Humans – with the Funk of 40,000 Years (a little something extra for you)

I hope you have a wonderful, spooky and safe Halloween! Franken MickiMonkey and Count SaraMonkey are here to remind you that Halloween is just over three weeks away.

Do you have your costumes? We obtained the majority of what we need for ours this weekend. Most years we end up scrambling at the last minute, and while the costumes are always great, it’s incredibly hectic to be throwing them together in the hours before a party.

END_OF_DOCUMENT_TOKEN_TO_BE_REPLACED This weekend was one of those “I’m slowly accepting that summer is over” kind of weekends.

Really, I do love fall. It’s got a ton of awesome things – Halloween, chili, pretty colors, pumpkin stuff, lessened concern about body hair… It’s what comes after that I have trouble with.

You see, I take some issue with winter and its holidays. Add to this my addiction to Michigan summers, and fall is basically the come down before withdrawal.

Still, I try to enjoy it. I appreciate our sunny days when the temps are only in the mid 60s and leaves reflecting the warm side of the color wheel drift around the lawn. I happily stir a pot of black bean chili. I spend two days straight in a soft brown cardigan.

I listen to Ben Folds 5, Counting Crows and Tori Amos (my ‘fall music’ since the late 90s, when the gloomy seasons were all the rage for goth kids and alternateens).

END_OF_DOCUMENT_TOKEN_TO_BE_REPLACED 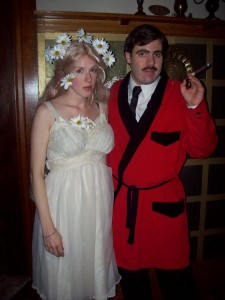 Short and sweet, folks. A full weekend has turned out to be much busier than planned, and I just don’t have the time or energy to wax smart with my words.

Saturday was a day for being in costume, and suffering under a bushy blonde wig for several hours at a time. In the early afternoon, we visited the niece and nephews in our gnome costumes, as Gnomeo and Juliet is a current favorite over there. They responded better than they did to Link and Zelda last year, and didn’t even ask us to remove our pointy hats. They grow up oh so fast.