The History of Dentistry 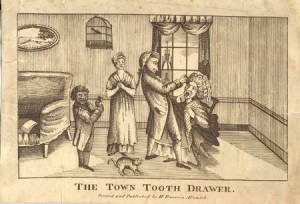 This is a post I’ve been meaning to do for a while… in fact it tried to post itself without my permission last week. The idea came to me after we had our routine six month check ups.

I have this sort of fascination with old medical stuff. Whether it’s practices, philosophies, instruments or potions, I think looking back at the way we’ve “fixed” our bodies over the centuries is entertaining and educational.

And it serves to remind us how little we actually understand about health and illness. Sure we’ve come a long way since leeches and doctor recommended smoking, but as with any science, the more we learn the more we realize we don’t yet grasp.

So, for a little bit of fun and fact, I present to you a brief history of dentistry:

The practice of dentistry began thousands of years ago. Some evidence found in Pakistan suggests that people were making holes in teeth as far back as 7,000 BCE, perhaps to drain infection.

The ancient era of 3,000 to 1,000 BCE is more commonly thought of as the true beginning of dentistry. Egyptian skulls contain small holes that appear to be purposefully drilled. By 500-300 BCE the citizens of the Roman Empire knew how to extract teeth. Hippocrates and Aristotle wrote about issues such as tooth decay, gum disease and oral repair. Later, around 200 BCE, Asiatic people were filling cavities with silver.

During the Middle Ages, dentistry was mainly practiced by monks and barbers. When the church decided that dealing with the blood of patients was unfitting for clergy, the barbers took over. In England, this group of barber-surgeons eventually became the Royal College of Surgeons.

1530 saw the publication of the first book devoted entirely to dentistry in Germany – Little Medicinal Book for All Kinds of Diseases and Infirmities of the Teeth.

Pierrre Fauchard is known as the father of modern dentistry. He advanced the cause of separating dentistry from general surgery in the first half of the 18th century, and wrote a detailed book on the diagnosis and treatment of oral diseases. This was the beginning of the era when dentistry really developed as a profession and science. By the mid 1800s, things like anesthesia, vulcanite and porcelain dentures progressed treatment and repair so that dental work became less painful and more effective.

The 20th century gave us Novocaine and a better understanding of prevention. X-rays were also gaining popularity for the detection of unseen decay. Toothbrushes entered the homes of working class people. Just past the mid-century, fluoride became a regular additive to toothpastes and public water – a fact that has since caused debate over the potential danger of such regular exposure to the mineral.

Currently, the practical side of dentistry is a given. We expect relatively painless treatment and good results following proper care. The aesthetics are getting better all the time. Where my mother’s mouth has a few metallic fillings, mine carries only a couple of invisible repairs. My sister has lovely pearly whites after a stint with braces and I was able to whiten my teeth at home before my wedding (thought I don’t recommend those OTC strips and stuff… not really so good for you. Observe stain prevention instead).

As a side note, George Washington did not wear wooden dentures. While he did begin to lose teeth in his 20s, he opted for more refined falsies made of ivory, gold, lead and animal and human teeth. A little gross and healthfully questionable, but not wood.