The Pumpkin Challenge, and a Challenged Pumpkin 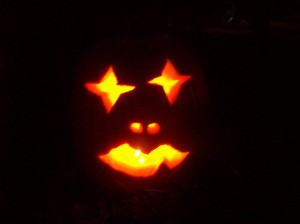 A face only the carver could love…

In case you haven’t noticed, I really like Halloween. It is one of my two favorite holidays (three if you include summer). I think the vibe and theatrics are fabulous, and I especially appreciate the emphasis on parties and creativity rather than rampant commercialism and chaos (at least, that’s how it goes in my world).

Over this weekend, we attended a pumpkin carving party. I usually don’t have too much trouble coming up with a design, but this year, the orange squash wasn’t speaking to me.

Everyone else was finished carving and setting their creations on the front lawn to be lit and photographed, and I just sat there staring at my jack-o-no face. Then a little voice in my head said “You’ve never made one with stars for eyes.”

Brilliant. I made marks with a pen, and began carving out four-point star eyes. As I did so, Ellie Goulding’s “Starry Eyed” ran through my head.

I decided that full lips were a must for this pumpkin, and added one tooth as a last minute Halloween touch.

I had no clue what to do for the nose, so I just gave it nostrils.

The result? A jack-o-lantern that looks somewhat… off. Let’s just say he wouldn’t win any IQ contests.

But he’s mine, and currently getting rained on on our front stoop. At least he has my husband’s adorable winking jack-o-lantern to keep him company. 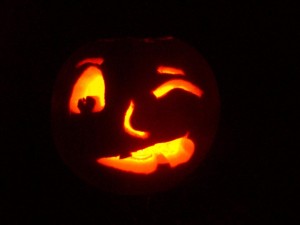