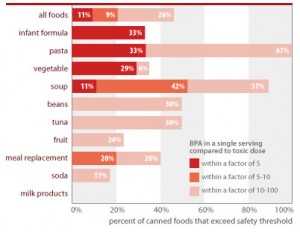 I do hope you’ve heard of BPA, and how it’s a shady component in many of our food containers.

I was shocked when a nurse at my OB’s office was unfamiliar with the concerns about BPA in baby bottles. I thought it was practically a mainstream scare, not just something us weirdo-hippy types talk about.

BPA is bisphenol-A, a chemical commonly used in food and beverage containers. Plastic seems to be the best known source of BPA in our food, though the ingredient is also used in the lining of aluminum cans holding soups, fruits and vegetables, meats and pastas.

Yup. Put down that bottled water and tuna sandwich. Why do they have to make it so hard to be healthy safely?

I’ve known about BPA for quite a while now, and have tried to minimize it in our home as much as possible – especially now that I’m pregnant. There are suspicions that developing fetuses are particularly vulnerable to the effects of BPA. I got one heck of a reminder about this from Michigan Radio yesterday.

According Joe Braun, a research fellow at the Harvard School of Public Health, a recent study found that “…gestational bisphenol-A exposures… were associated with behavior problems with the girls of these mothers at three years of age.” He suggests that the reasons for this could be related to the fact that BPA acts like an estrogen, and may interfere with fetal brain development. The same effects were not seen in boys, and the study took into account other factors, such as smoking and socio-economic class.

Now, I can think of far worse things than behavioral issues when it comes to potential negative effects of chemicals in our food supply. Still the fact that BPA seems to interfere with brain development of unborn people sends up a huge red flag, suggesting that there’s more to it.

A quick online search brought up a 2007 article from the Environmental Working Group. Here are the points that stood out to me:

There’s plenty more to damn BPA, but I’ll let you read it for yourselves. Astounding stuff.

For the time being, me and the Grumpy Apple/Mini Pumpkin are staying away as much as we can.