I’ve Got a Grumpy Tummy 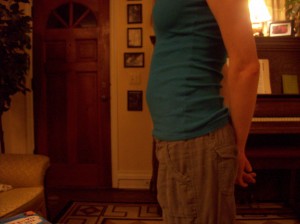 Just so we’re all clear:

I’m 13 weeks pregnant. Today. We are now officially in the second trimester of this happy little project!

Our baby’s prenatal names thus far include: Numpin, Grumpy and Bok Choy, often coupling the “Grumpy” with whatever the preggo sites use for fetal size comparisons: The Grumpy Sesame Seed, The Grumpy Olive, The Grumpy Lime… It amuses me, although my mother refuses to attach any word that implies less than angelic and adorable to the wee one. She’ll be an excellent grandma.

Oddly, some days I practically forget that I’m pregnant. Others, it’s pretty much all I can think about. In the first few weeks, it was more of the latter.

See, we found out about our newbie three days after I quit my job to begin my freelance career. I had reason to think biological children were not in our immediate future, and just as I began to settle into a career-focused, maybe-we-can-travel-more zone, I got two lines on each of three pee sticks. Two weeks later, I sat in my home office trying to begin my first day as a freelance writer while scheduling an impromptu ultrasound and waiting on blood work results after a small amount of spotting.

There are things they don’t tell you about pregnancy – things that seem scary but aren’t always such a big deal.

Everything turned out fine, and by the end of that first week I was getting used to the idea. Seven weeks have since passed, and now I can’t really imagine not being pregnant. Seriously, what’s it like to have a cocktail, wrestle with your husband and not worry about abdominal crunches?

I’m probably not going to blog about the pregnancy much. It may come up here and there, but at this point, I don’t really feel like I have any insight that’s not already out there. Plus, I’ve got other things I want to write about.

Not to say that I won’t occasionally word vomit about it (lucky for me, the only vomiting I seem to have to worry about!). It is sort of a big deal, and we are certainly getting more excited by the day.

So, there it is! Thanks for reading, from me and the Grumpy Tummy!