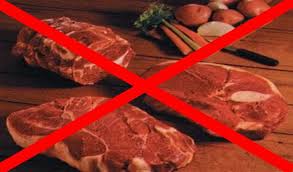 Last weekend, I cooked turkey for the first time in a long time.

I was making a soup for some friends who just had a baby, and as the mother is breastfeeding, I wanted to throw in enough protein and heartiness to give them a real, sustaining meal. That, and with Thanksgiving so close, I thought it would be seasonally appropriate.

All I had to do was brown some ground turkey, and it really wasn’t so bad until I looked down at the mash of pinkish slop that was in my pan. The look and smell of it, while striking a somewhat primal chord, was pretty much repulsive.

The experience reaffirmed, once again, that I am perfectly happy not eating animals (at least, not those that lived on land). Not only was it just icky to me, it was hugely messy compared to our usual kitchen work.

If you’re considering cutting out or back your meat cooking and consumption, be encouraged with these practical benefits of banning raw meat from your home:

Maybe it’s not enough to convince you, but believe me when I say it’s pretty awesome not having to worry about raw meat in your fridge and on your counter.