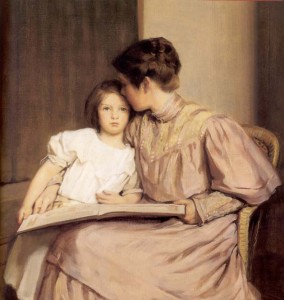 Yesterday I hung out with two friends, both of whom have daughters around the age of nine. While we chatted, the girls played downstairs, ventured out into the snow and watched cute puppy videos on YouTube.

After about an hour, I heard one of the girls exclaim disbelief at the young age of the other’s mom. See, one of my friends is in her mid twenties, while the other is in her early 50s – sort of opposite ends of the age spectrum when it comes to having young children.

For my part, I was instantly taken back to my third grade classroom and a conversation a few of us were having about the ages of our parents.

“Daaaang! Your parents are oooold…”

My parents were definitely at the older end of the parent spectrum. Apparently ahead of their time, they’d married at 32 and had me when my mom was 34. So when I was nine, my mom was well into her 40s, whereas most of my classmates’ parents were somewhere in the late 20s to mid 30s range.

My mother also wore her hair in a bun, which is classic and feminine by all worthy opinions. Still, in 1988, it wasn’t nearly as cool as crimped locks and tall bangs. Sorry, Mom.

Add to that that my mother is the youngest of five. Her siblings (excepting an identical twin) are eight, 12 and 16 years her senior. Having an older family is just how it’s always been for me.

But back to that distant conversation. The classmate across the table from me, who was later to become one of my best friends, informed us that her mother was only 24; I quickly did the math. What?!? How could that even be? I mean, I understood what it took to have a baby, but I’d never heard of it in practice among people so young. Maybe I was a bit sheltered.

Anyway, my reaction, albeit less vocal than my older friend’s daughter’s, was really just as strong. I simply couldn’t imagine having a parent so youthful.

That classmate is still my best friend. Her mother is now about 46… not much older than my mom was when we had that third grade conversation. Every now and then it comes up, and I still think it would be weird to have a parent so young.

Of course these days, I’m speculating about how my own daughter will perceive my age. I feel my husband and I are at a relatively average age for having our first baby – we’ll be 31 and 32 when she arrives in March. We know plenty of people who went the same route, and more who aren’t even attempting to have kids yet. But 2012 is very different from 1980, and I rarely style my hair in a true bun.

Most of the time, I’m still trying to wrap my head around this whole “being a mom” thing. I’m excited for sure, but realize how quickly I can put myself back into the mind of a nine year old. Maybe that’ll be a good thing in another decade or so…

2 Responses to Age: In Mom Years