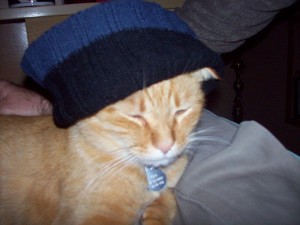 Along with my husband and myself, two cats live in our house. We’ve always had two cats, aside from the brief period after one was hit by a car and before we adopted a new kitten.

Every now and then, I’m reminded how much a part of our lives these felines are. Most recently I was reminded when we noticed our oldest cat, Ted, walking with a slight limp. He’s alright – maybe just a little stiff with the cooler weather. Nevertheless, his health is really very important to us.

So, without further ado, los gatos:

Theodore Rosencantz Mitchell (Ted) is a seven year old, orange tiger-striped kitty with a feral attitude and weakness for a good brushing. We adopted him at three months in the fall of 2004 from the Humane Society. They said he’d been found in a dumpster. Once he got home, Ted recieved a new name from his daddy, who wasn’t partial to his foster name, Gonzo.

We knew from the start that Ted was going to be a challenge. He does what he wants. For example, on the drive home from the Humane Society he escaped from his carrier and crawled under my brake pedal. Luckily I had a friend in the car, and she managed to catch and hold him for the rest of the ride.

When we got him into the apartment and set him free, Ted immediately jumped up and down in one spot, and then ran from one end of the place to the other for about four hours. A few days later he got out of the house and had to be hunted.

Although he is now free to spend hours outdoors, protecting his turf and catching mice, Ted is still our baby. He purrs easily and is big into nuzzling.

Queen Mab (or Maude) is a year and a half old. She looks very black, but in certain lighting shows a dark brown coat with darker brown stripes. We adopted Mab when she was about three months old from a local feral cat shelter. She cost half the normal price because superstition makes it hard for black cats to get adopted.

It’s very obvious that Mab learned how to be a cat from Ted. She’s affectionate, but not always willing to be held. She talks a lot (Ted is extremely vocal), and often sustains a meow for several long seconds. She differs from him in that she has a fondness for alcohol and will lick your lips until they’re raw.

More than just about anything, Mab loves string cheese. In fact, the food kind of taught her to use her voice. She discovered one evening that if she meowed at my husband, he’d be so struck by how cute she was that he’d give her a small piece of cheese.

In the past week, we’ve finally grasped that when Mab appears to be chasing the air in front of her, she’s actually chasing the shadows of her head and paws. 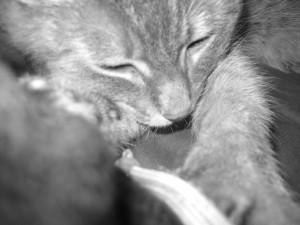 Alice was my first real pet. We adopted her the same time we did Ted. We assume they were siblings as they were found in a dumpster together and had similar markings. The main difference between them was that Alice was grey and unbelievably cuddly.

After spending a few hours with this kitten, I decided she needed a French name. With a quick Google search of “French girl names” I found “Alice,” and that was that.

This cat was insanely lovable. She loved to be held, and would wrap her paws around your neck whenever possible.

Sadly, Alice was hit by a car about 100 yards from our house in the summer of 2010. Losing your first pet at 29 really sucks, I can tell you that. To this day we often comment on how fabulous Alice was, and how much we miss her.

So, those are my kitties, los gatos. They’ve been our babies for years, and will continue to be so, even after the human baby arrives next year.