The Fish and The Stars

My curiosities wriggle to the depths of the oceans,

And flit to the height of the stars.

Sharing niceties with the fish,

And begging secrets of the planets.

Listening to Sagan as if in a dream,

And hoping his sentiments do not go unheard.

Musing a little as we hear that NASA’s Voyager 1 is officially the first human-made object to leave our solar system and enter interstellar space. Wooooooooooow. Words fail. Astounded. To only imagine what might be found… or what might find Voyager.

We watched some “tribute” videos of Carl Sagan this week, and were again put into that dreamy, inspired trance that his intonation and knowledge always impart. Science and humanity take on new meaning when spoken of by such a sage.

Also, because it’s pretty, and because stars… and fish: Also, because cosmic fish (the only clip of this I could find):

In going back and reading the earlier parts of this story, I realized that I should make it clear that this isn’t meant to be anything astounding or well planned. I will only say that it is loosely (oh, so loosely) based on the Irish myth of Cessair. I’m just writing blind for fun here, folks. Such a novel idea, I know.

If you want to start from the beginning, here’s Part 1.

When we got in the tent I changed my skirt and hung the other to dry near the hearth. It was one of my favorites, even in advanced age and with numerous snags. Despite Fintan’s attempts to convince me to turn it into a rag, I insisted on keeping it as a garment for fishing, berry picking and other outdoor tasks. It was just strong enough to be practical, and just delicate enough to let me feel like a grown woman.

Fintan went to work preparing the fish for dinner. I’d not caught much, but it would make a nice meal for the two of us. I’d try again tomorrow for a larger catch that we could dry.

“Who was that small man, out there with everyone?” It came out of my mouth suddenly, as if by suggestion. I almost looked around to see if he were there with us.

END_OF_DOCUMENT_TOKEN_TO_BE_REPLACED

The Story of Sushi from Bamboo Sushi on Vimeo.

When I became a vegetarian, the animal flesh I most missed eating was seafood.

This might be because a lot of pork, beef and chicken products are well imitated with various meat substitutes, and easily replaced with items like tofu and beans.

But I have yet to find anything that stands in for a nice salmon fillet or sashimi sampler. I’d only come to know and love sushi in the couple years before going veggie, and it had become a significant part of my diet. More than bacon, more than chicken and yes, even more than steak, I missed eating fishies.

END_OF_DOCUMENT_TOKEN_TO_BE_REPLACED 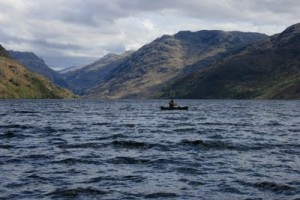 I awoke with a start to the flapping sound of wings. The gull that had been digging though the crumbs of my basket, scared by some shift of the wind, rose high into the air above my boat.

I immediately thrust my head over the side to look for what I both hoped and dreaded to see. But there was nothing more than water bugs and sediment, ripples from the breeze. I felt relief, but under that a curious disappointment.

My attention quickly changed when I realized I’d been on the lake much longer than I’d planned, and that there was no doubt a group of concerned family members wondering where I was and why dinner wasn’t ready. Only briefly did I worry about knocking anything – or anyone – in the head with my paddle as I made my way to the beach.

END_OF_DOCUMENT_TOKEN_TO_BE_REPLACED 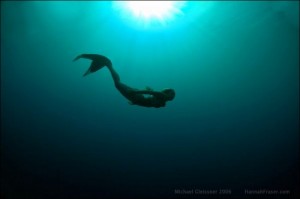 The boat rocked so subtly that I barely felt it, though I could see the movement of the water beneath my face.

My vessel was small – just large enough to hold me and a basket of food and water. I’d consumed its contents, and was contentedly stretched out and peering over the edge.

Now and then I caught a glimpse of the fish darting around under the surface. I imagined a whole world down there, one I could only see through a curtain of liquid and reflection, and that was distorted by ripples and sediment. How strange that a place that looked so peaceful could prove deadly were I to enter it for more than a few minutes.

END_OF_DOCUMENT_TOKEN_TO_BE_REPLACED

Every vegetarian hears it: “But, where do you get your protein?”

I’m sure plenty of them don’t have a good answer. I know that the first time I tried cutting out meat, I did it totally wrong. Living on veggie subs, spaghetti and scrambled eggs does not a good vegetarian make. Living on salads isn’t a good idea either.

Nope. Folks who eat no meat need to load up on beans, nuts, quinoa, meat substitutes like tofu and tempeh, and, if one is not vegan, animal proteins like eggs and dairy.