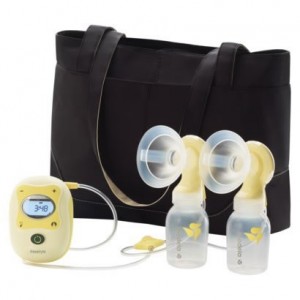 This post really is about boobs, and not in a fun way. Fair warning.

I’m willing to bet that most of my hours last week were spent breastfeeding, breast pumping and breast pump parts washing. I also made a lot of formula bottles and fed them to my baby.

When we took our daughter to her four month check up about a week and a half ago, the pediatrician recommended that we start supplementing with formula after every feeding. I wasn’t surprised – Iris is tiny. She clocked in at 10 pounds and 10 ounces two days after she hit four months. She has almost two and a half pounds to go until she’s doubled her birth weight.

Her size doesn’t really bother me. My sister and I were both 10 pounds at six months, which is crazy little. But we turned out okay for the most part, and Iris is already bigger than we were then. Of course, she weighs what our nephew did at birth. I decided to go ahead and supplement.

And FYI, that transition sucks. My supply immediately went down, and Iris got used to her food coming out much easier and faster. The result was decreased breast milk and a baby who refused a boob that was less than overflowing. Thus ensued the downward spiral that I thought would end in endless bottle washing, expensive formula purchasing and no more (pleasantly) drowsy nursing sessions.

My reaction was annoyance at the pediatrician for assuming I was ok with essentially switching to formula, and resentment toward the smelly powder that was taking space and making gritty spots on my counter.

But my husband and I talked about it, and remembered that Iris is our child and as long as she’s healthy, we don’t necessarily have to stuff her with formula to bring up her weight. I can work on my supply too.

It makes sense that so many women feel inadequate at breastfeeding when the professionals are so quick to send them on the easy route.

This isn’t to say that formula feeding is wrong or anything. I totally understand that for many women, it is preferred and better. I’m just not one of those women. I want to breastfeed, and demand the chance to do it better than I am now.

Solution? Scale back the formula to only two or three feedings a day. Increase breastfeeding, even when there’s not much in there. The more that baby is on the breast the more production is stimulated. If she can get even a little, it’ll keep her from becoming super hungry and impatient. Oh, and pump like it’s going out of style. My favorite part? Eat more calories. Some days are so hectic that I don’t eat as much as I should, and low calories diets can inhibit milk supply

Within a couple of days, we were back to successful nursing, at least most of the time. It’s a work in progress.

As a side note, I really do like our pediatrician. Her job is to make sure Iris is healthy, and my desires for breastfeeding is secondary to that.

Don’t worry – the boob chat won’t be a regular thing.

Filed under AutoBio, Of Family and Children