My Boyfriend, He Be a Rockstar 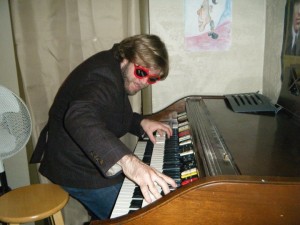 This is my husband. He plays keyboard in a band when he’s not handling dead bodies at the airport or rocking out on our upright grand.

Sometimes I like to call him my boyfriend. He was my boyfriend for five years, when we were young and so in love – good times. We’re still young and (even more) in  love, but now and then it’s fun to feel younger and in newer love. You get it.

Anyway, this is him, and I want to take a second to spotlight him as the most important person in my life. He’s truly a rockstar husband.

Example? Well, yesterday, before I’d even managed to make myself presentable, he told me I was pretty with words and cuddles, showered, dressed,  started the laundry (which he later finished and folded), made and set out breakfast, liberated the indoor-outdoor cat and began making plans for an enjoyable and productive day. He also chatted with a neighbor and did the dishes.

To make it even better, this was the morning after his band played a stellar show at a local bar. My girlish self was still basking in how cute he looked on stage, while he’d moved onto more married-manly things like washer water levels and using the vegan “cheese” that doesn’t make me bloated.

If you’re gagging, I apologize. But really, how could I not go on and on? Under the Beatle hair and lip-shaped sunglasses is a sharp mind and loyal heart. He deserves all the adoration I can give.

To finish off our day yesterday, he enjoyed (nearly) a bottle of wine while making me dinner and the week’s batch of black beans. See? Rockstar.

Filed under About a Freak

2 Responses to My Boyfriend, He Be a Rockstar